Developed by Aselsan, CAKI Robotic Arm System is a developed to be applied on all kinds of armored vehicles in order to ensure the safety of road and convoy for Hand Made Explosives.

It was mounted on Nurol Ejder Yalçın (4×4 Armoured Personnel Carrier) as the first prototype and named as “HAND MADE EXPLOSIVE DETECT AND DISPOSAL VEHICLE”.
Within the scope of this project, this simulator was developed for the purpose of introducing the vehicle and training the military personnel who will use the vehicle.

Simulator is used with VR controllers as Virtual Reality. In addition, the vehicle’s own hydraulic remote control device is prepared similar to the computer interface and integrated to the simulator.

This simulator was screened at IDEF’17 International Defense Industry Fair and tested by many civilian and military personnel. 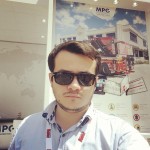